RE_CON: Reconstructing Authenticity
*Note: Unless otherwise marked, all work was done as a collaborative effort with the 2018-2019 Urban Design Build Studio cohort building upon the work of previous cohorts.
The intent of the RE_CON housing prototype is to ultimately have a positive impact on the community of East Liberty, both to the existing members and new arrivals. As characteristic of an area of concentrated poverty being transformed into an up-and-coming community, the issue of gentrification is one that poses a multi-faceted and complex ethical dilemma. Gentrification has, for the most part, been a leading cause of displacing existing members of the community while benefiting individuals/companies foreign to the location. At the same time, areas of concentrated poverty fail to attract retail and businesses which would support the neighborhood with resources which may be missing. Thus, the dilemma then becomes a discussion of the ways in which change can generate wealth for members of the community while having all of the benefits tied to investment in neighborhoods. To this effort, the 2017-2018 cohort of UDBS students performed extensive research on the various development proposals for attracting investment while minimizing the displacement of native members of the community. This work was the extension of a thesis conducted by a UDBS alumnus, Noelle White. Of the explored proposals, the fee simple proposal was deemed the most suitable for the funds and time available to the project. In the fee simple development proposal, market rate houses are designed, built, and sold at competitive prices. The profit generated from the sale of the property by the non-profit developer, in this case East Liberty Development Inc., is then invested in an escrow account to support existing community members and stabilize their presence in the neighborhood. In essence, the model sports a "Robin Hood" way of working where profits from the market rate members helps offset rising rent costs or supplement house repairs for the existing members. In addition, the replacement of a vacant lot can then drastically increase the value of surrounding homes, thus generating wealth for their owners. In this development proposal, our role in achieving the maximum impact rests in designing a marketable, replicable home that can be constructed efficiently and inexpensively to make as high of a profit margin to make as large of an impact as possible. However, in addition to this goal, we wrestled with how our collective/individual knowledge and passions also inform the design of the house whether in regards to sustainability, technology, beliefs, etc.

RE_CON Network Analysis
Given the complexity of the project and the greater context of UDBS work, it is to be expected that the scale and diversity of the team that enabled the project would be just as interdisciplinary and varied in profession, skills, and mission. Although our primary client was East Liberty Development Inc., the project was aimed to be a market rate housing prototype, which meant we had to address the contextual market and its preferences. That isn't to say, however, that the market was the primary determining factor. The UDBS also connected the project to DE_CON 01, the pilot deconstruction project that reclaimed materials to be repurposed in the RE_CON housing prototypes. and to RE_TOLD & HOME INCUBATOR, which are engagement tools applied to interact with community organizations and neighbors. There were countless stakeholders that were all intricately knit into a larger network of players that made the RE_CON 01 & 02 a possibility. 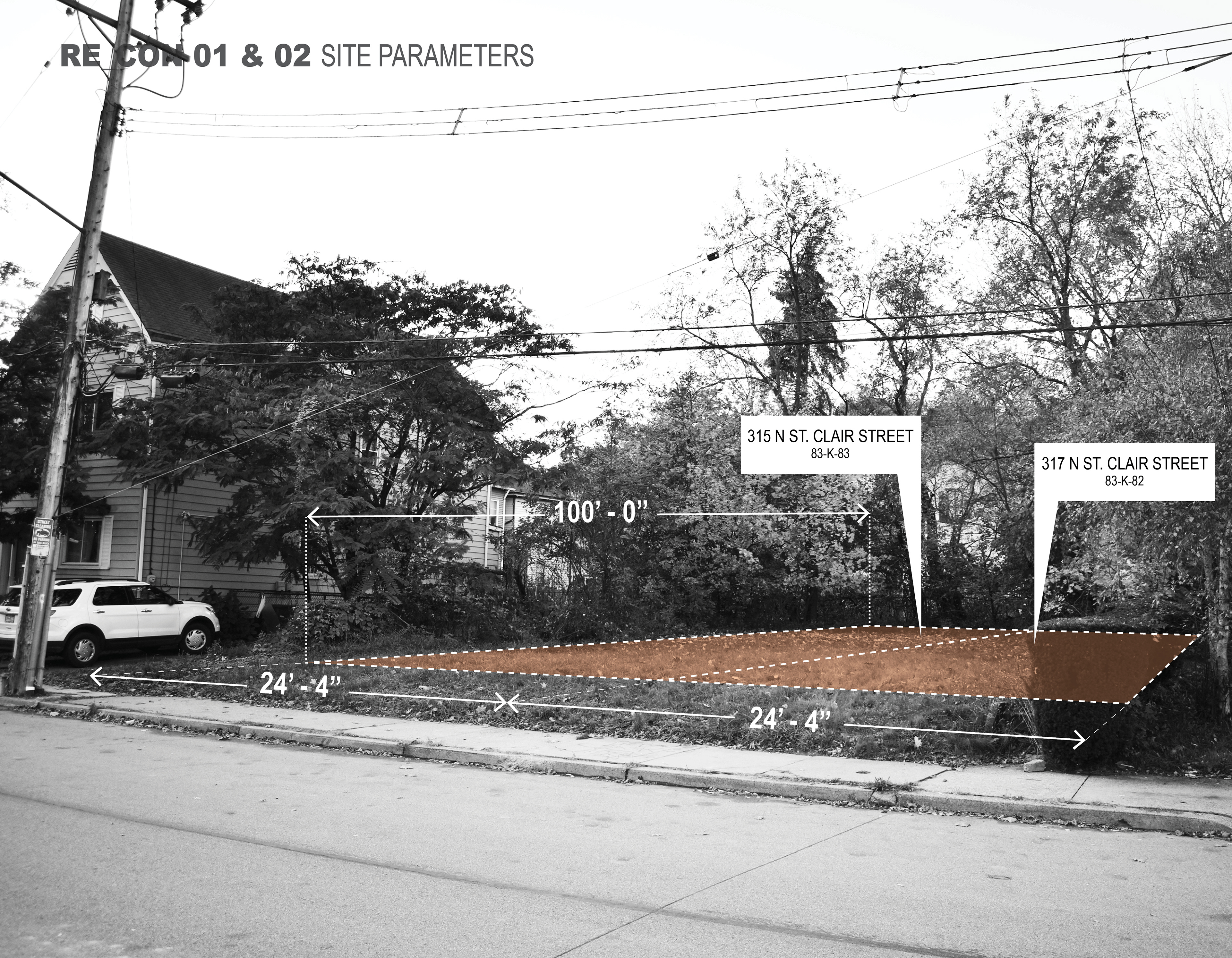 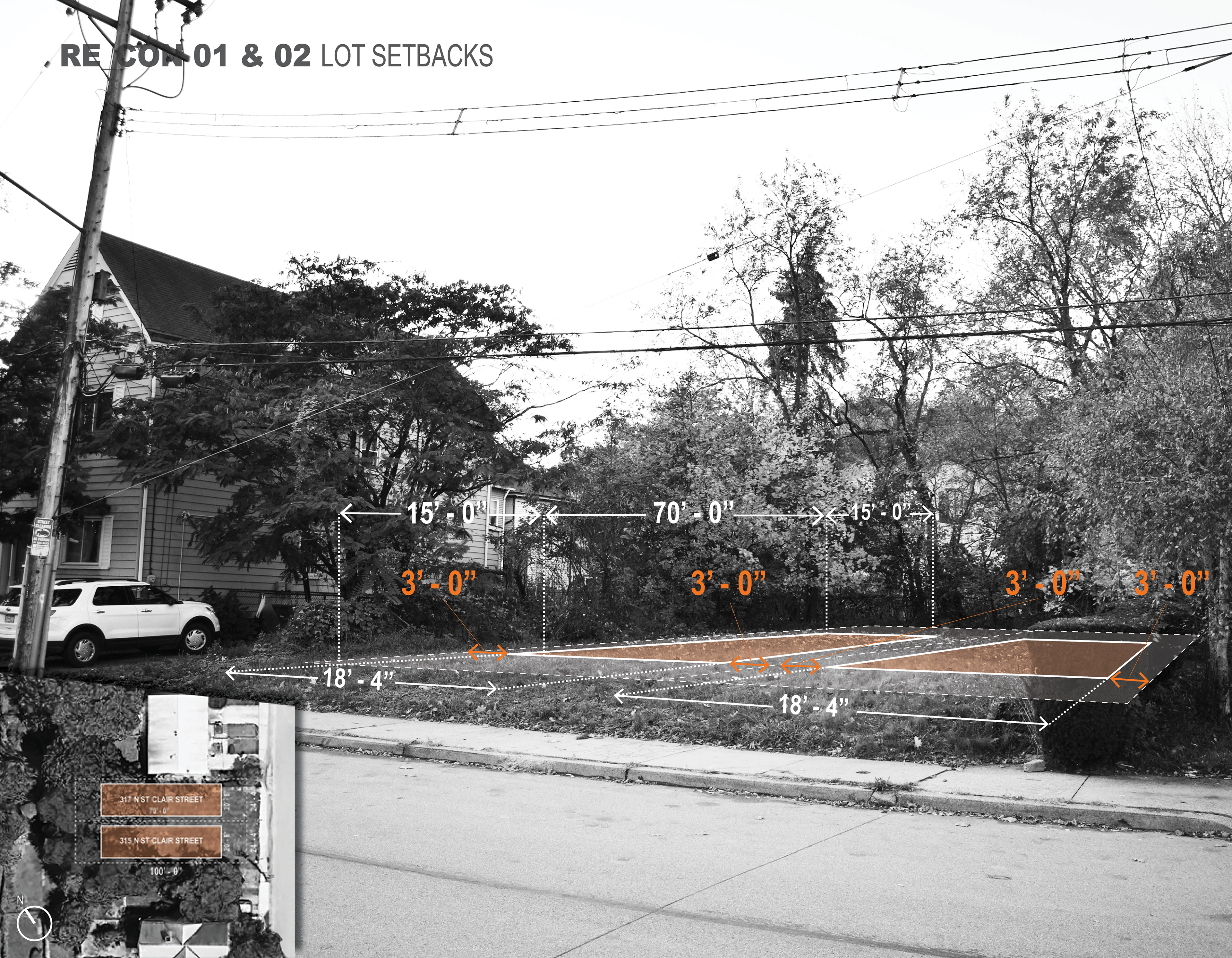 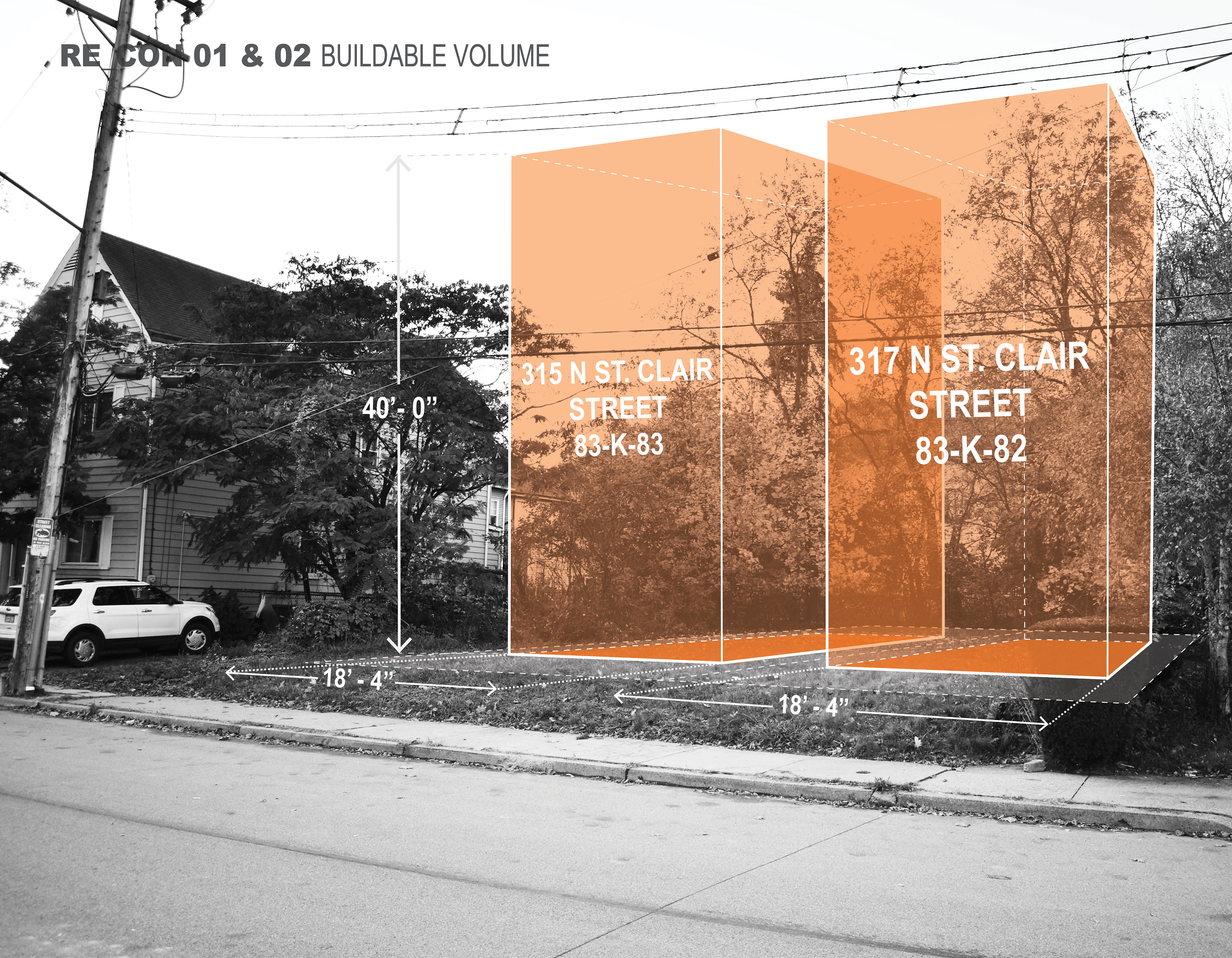 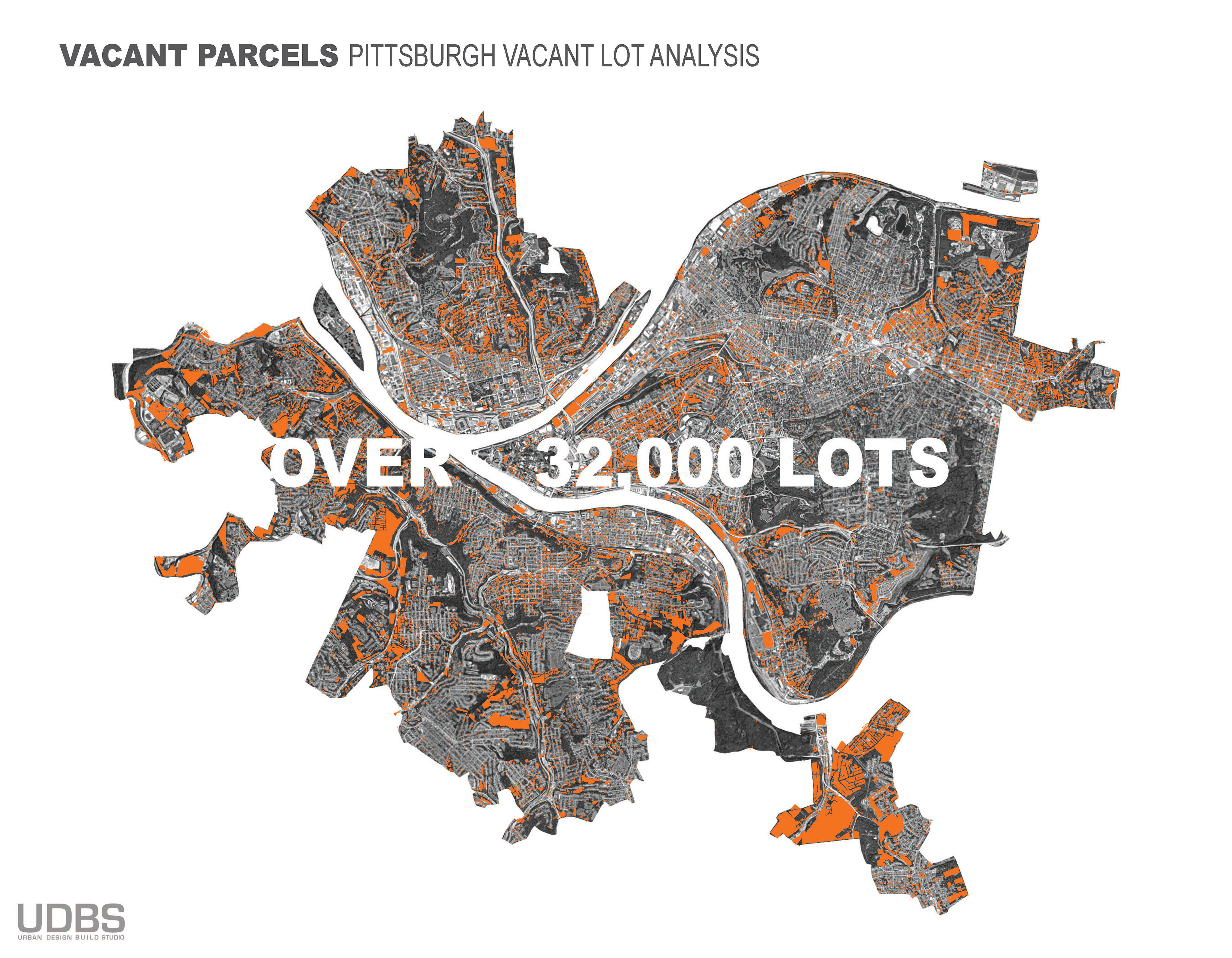 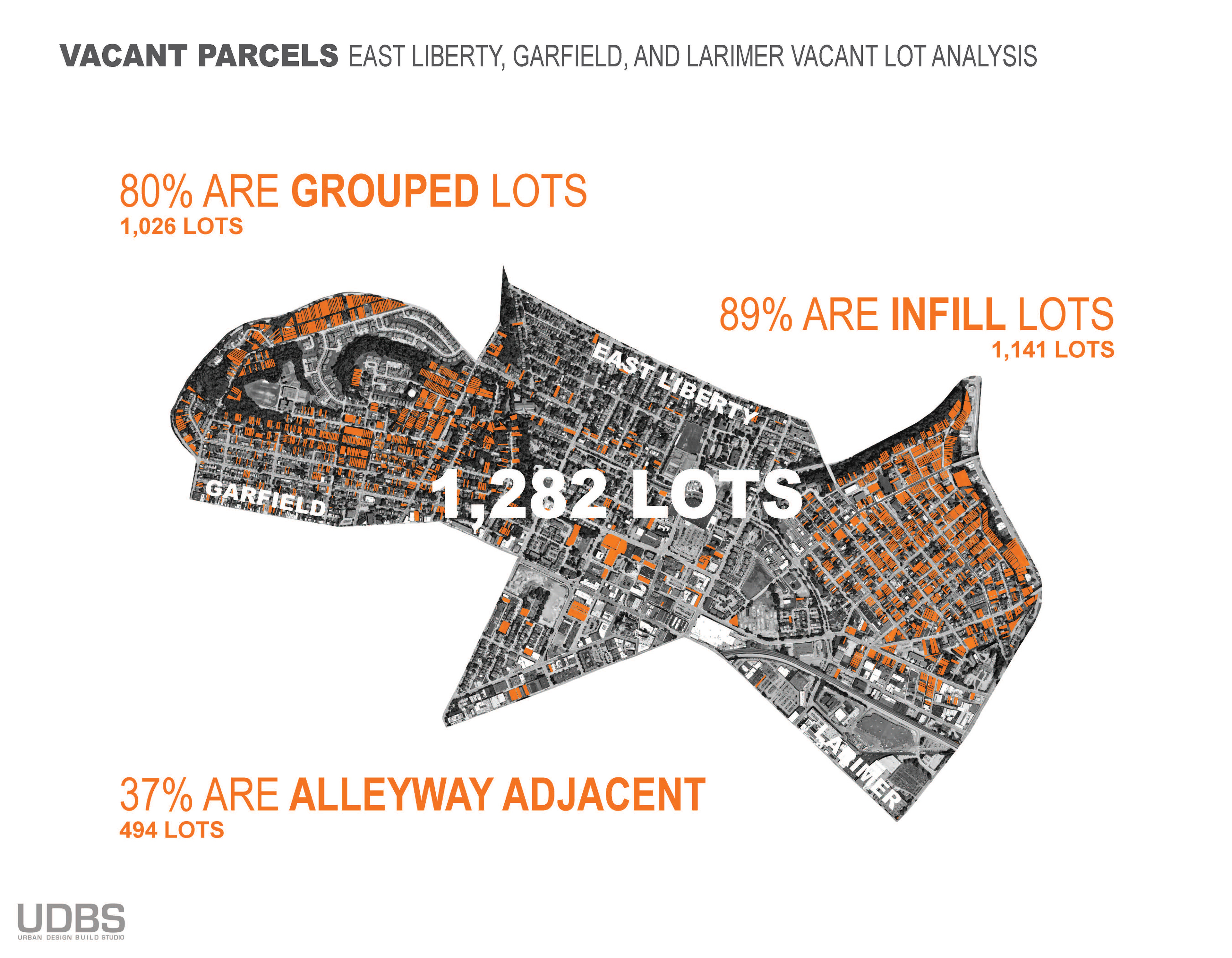 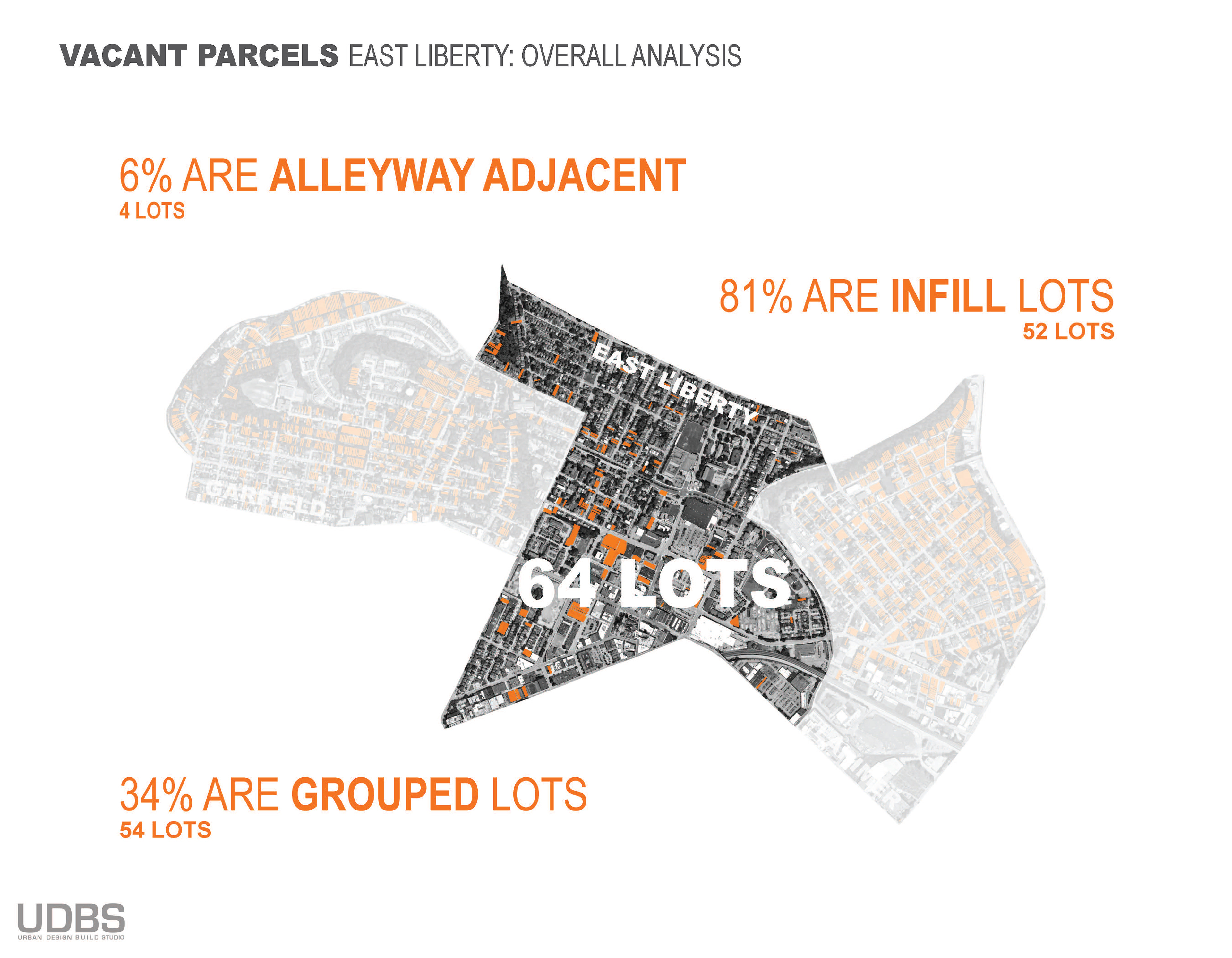 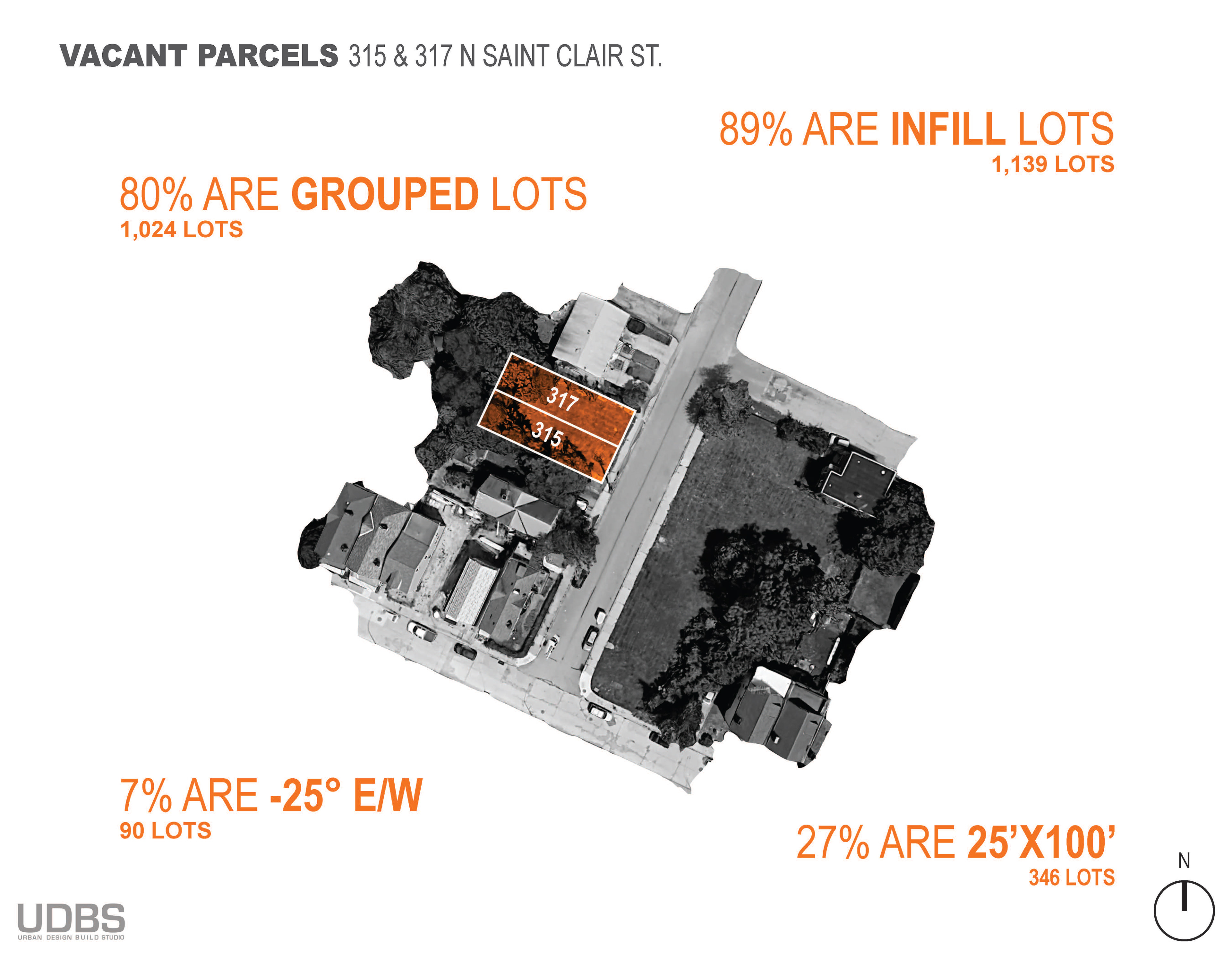 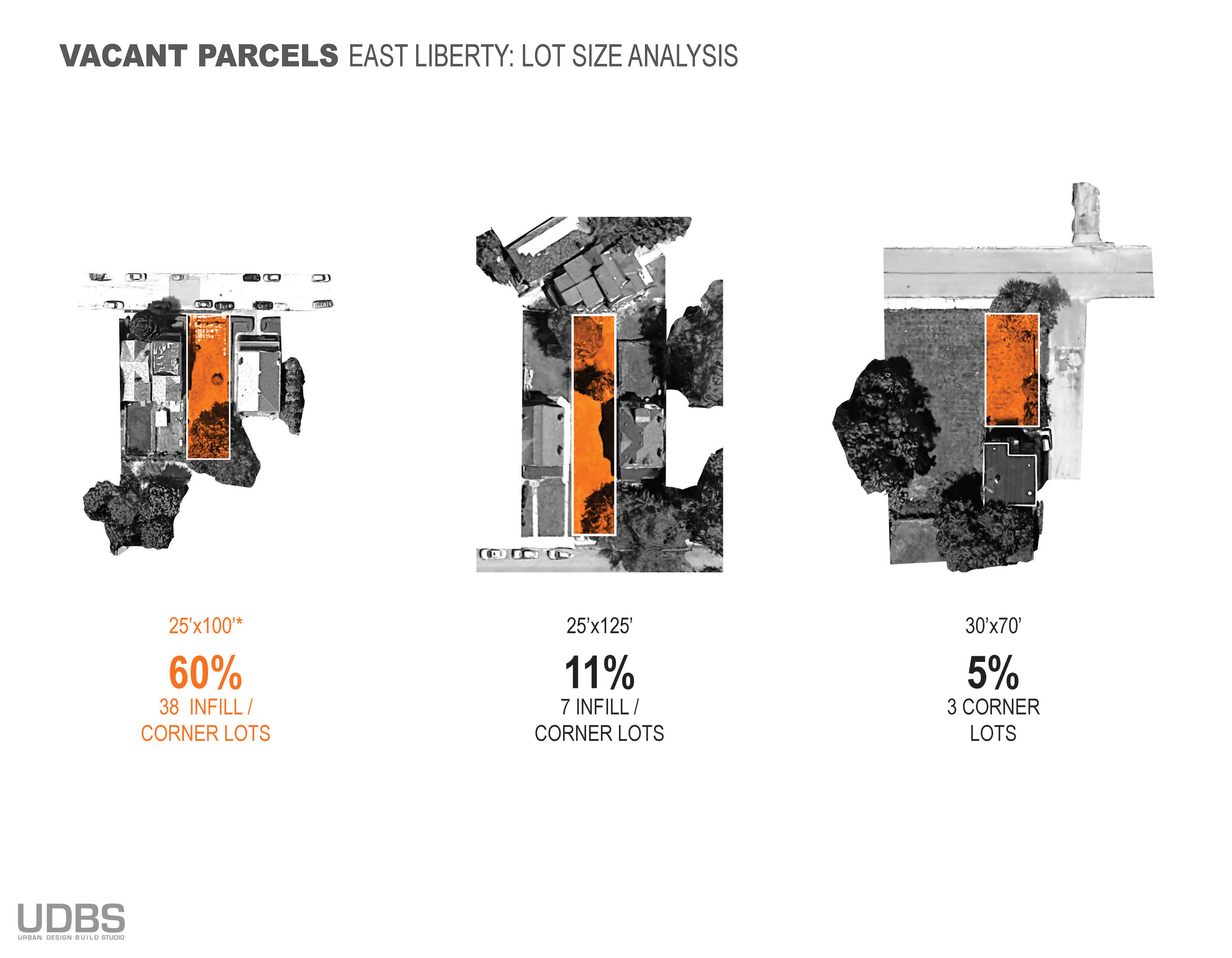 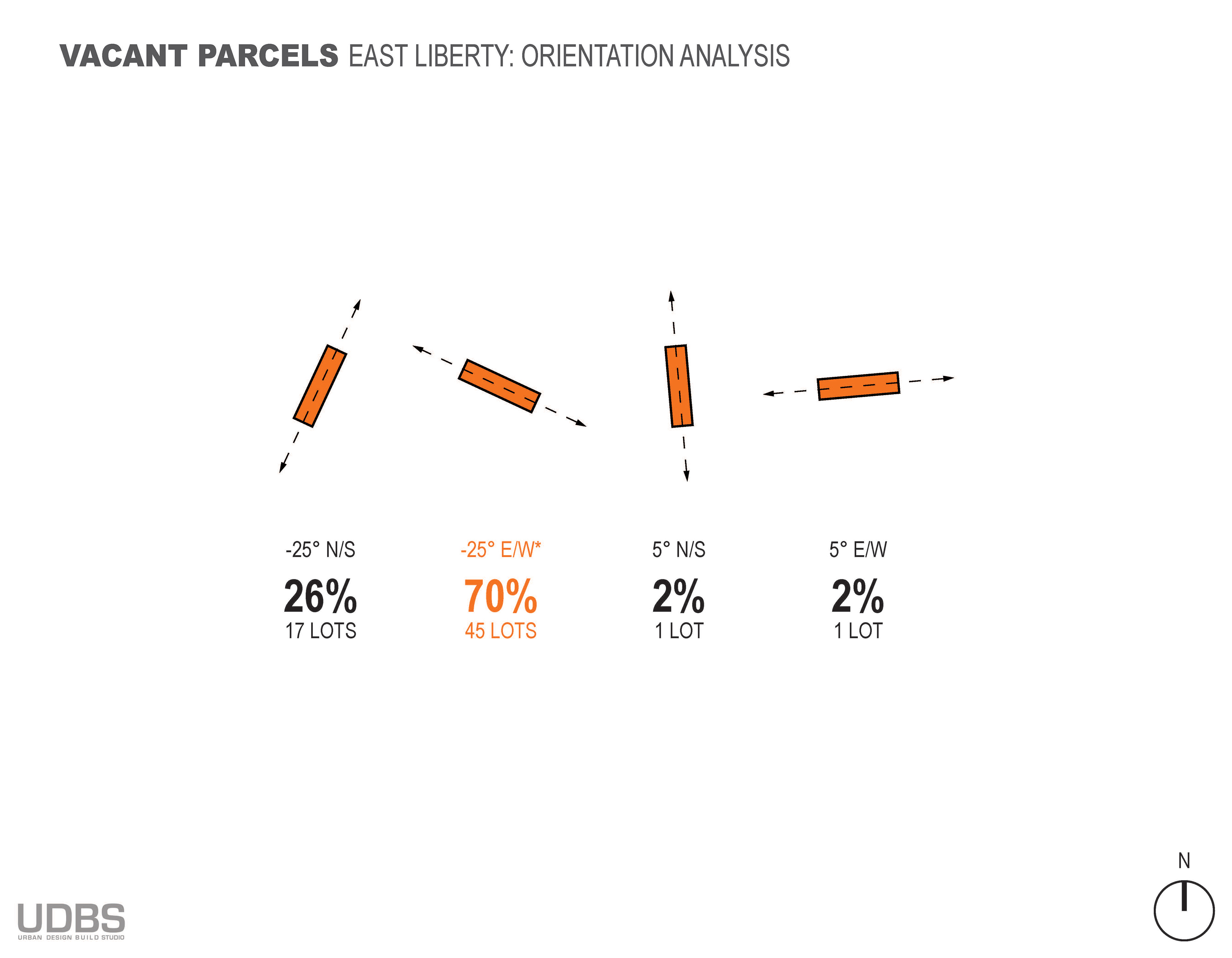 Replicability Study
In order to design a project to make a large an impact as possible, replicability is a principle that can not be overlooked. While one can have impact in executing a project once, one can have exponentially larger impact by designing with the intention of replication. For RE_CON 01 & 02, one critical element of replication is what kinds of vacant lots the design will be applied to and how that compares to the site for the first execution of the prototype. In this case, by working through ArcGIS, the Pittsburgh Real Estate Portal, and other online resources, we were able to catalog specific attributes in vacant lots in Garfield, East Liberty, and Larimer. We focused on issues of lot size, whether lots were grouped or individual, whether they were corner lots or infill lots, whether they were adjacent to an alleyway, and their dominant orientation of the longer axis of the lot. This information allowed us to determine what kind of mindset should be applied to RE_CON 01 & 02. In regards to lot size, we struggled with issues of width and having a much slimmer site, debating whether to apply for a variance or just comply with code. It was also beneficial to know that the 20’ X 100’ vacant lot was fairly common to make sure that our design could be applied to differently proportioned sites. In terms of understanding the grouping or individuality of lots, this was important to know when considering detached schemes or duplex/attached schemes. The corner and infill lot designation shows how common each type of lot is found which represent two different conditions to design for. The adjacency to alleyways allows lots to have parking behind the house and may serve as an argument to not provide parking if pursued as an option. Lastly, the orientation of the lots, although with some outliers, gives a general idea how the design will be positioned in relation to the sun and have an impact on how the design is manipulated to account for more specific environmental information. This information has been exceedingly significant, especially when making decisions between designs to be able to rule designs that would not be applicable on other sites.

Another crucial aspect of adaptability/replicability that was a crucial aspect of the project was having a kit of parts and allowing for the project to imagine different versions of the prototype based on a host of factors which was diagrammatically explored through a matrix. This sensibility carried through to how we approached and viewed the project, as we continued to explore and test different configurations, proposing that RE_CON 01 & 02 to not be identical to one another, allowing them to adapt to their similar and different contexts.

Contextual Response
In order to facilitate a better understanding of RE_ CON’s context as well as the broader Pittsburgh context, a series of stitched elevations were created to begin understanding ideas dealing with parking, porch culture, roof strategies, and boundary conditions. These aspects of buildings then speak to one another and impact how the house and its occupants interact in the public realm. In seeing what have been regarded as great contextual Pittsburgh residential architecture, we eventually began to understand the formal breakdown of the front facades. The existence of a porch band to promote social  connection with the street which is joined by a band of windows that connects the houses to their adjacent neighbors. This assembly is then capped by a diverse arrangement of different roof types, in this case, a baseline hip roof with different dormer typologies added onto it. The understanding of these contextual systems directly informed the design of the RE_CON housing prototype, although we implemented other factors like the slope of the roof and market-driven aspects to find their way in as well. 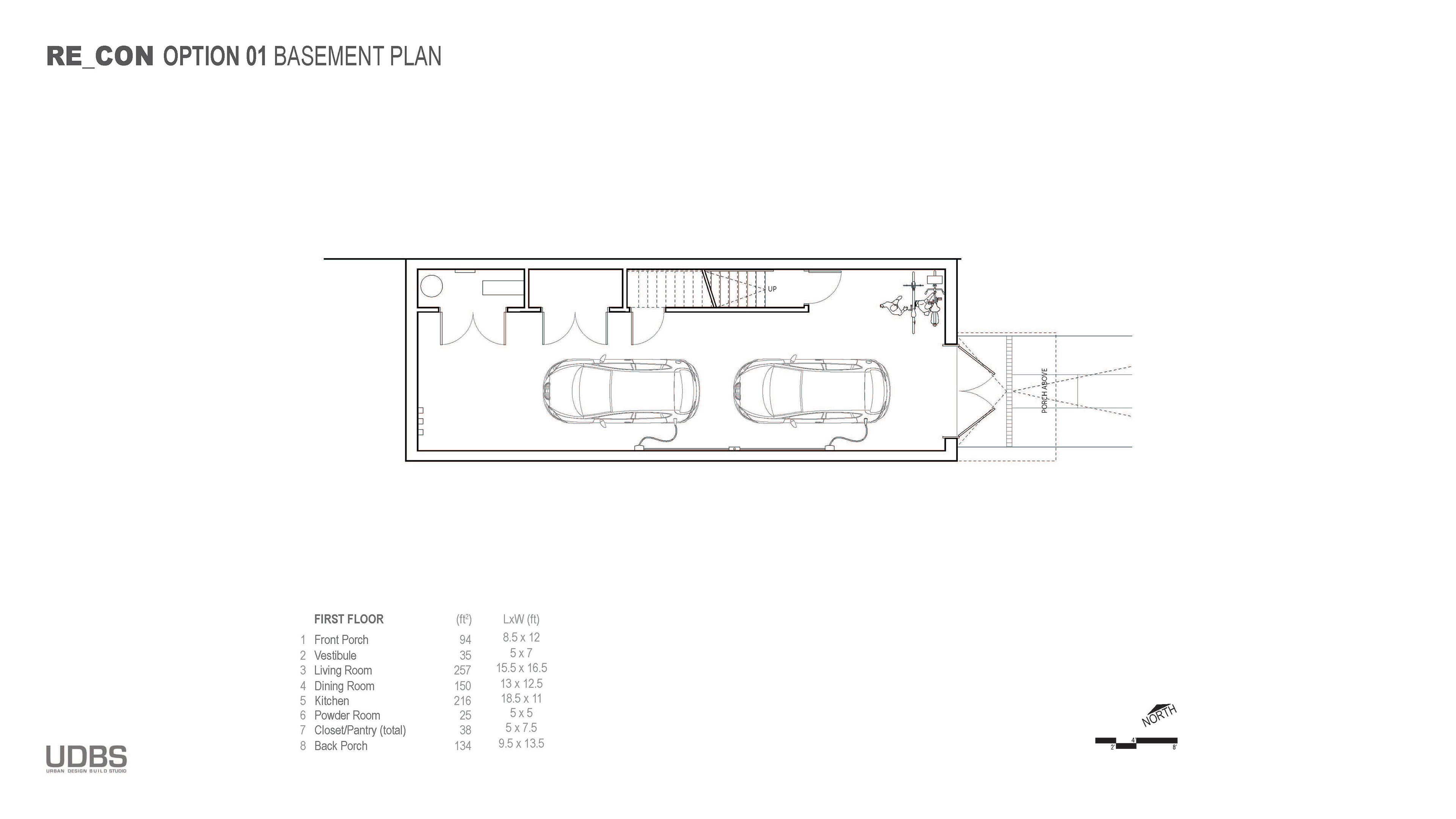 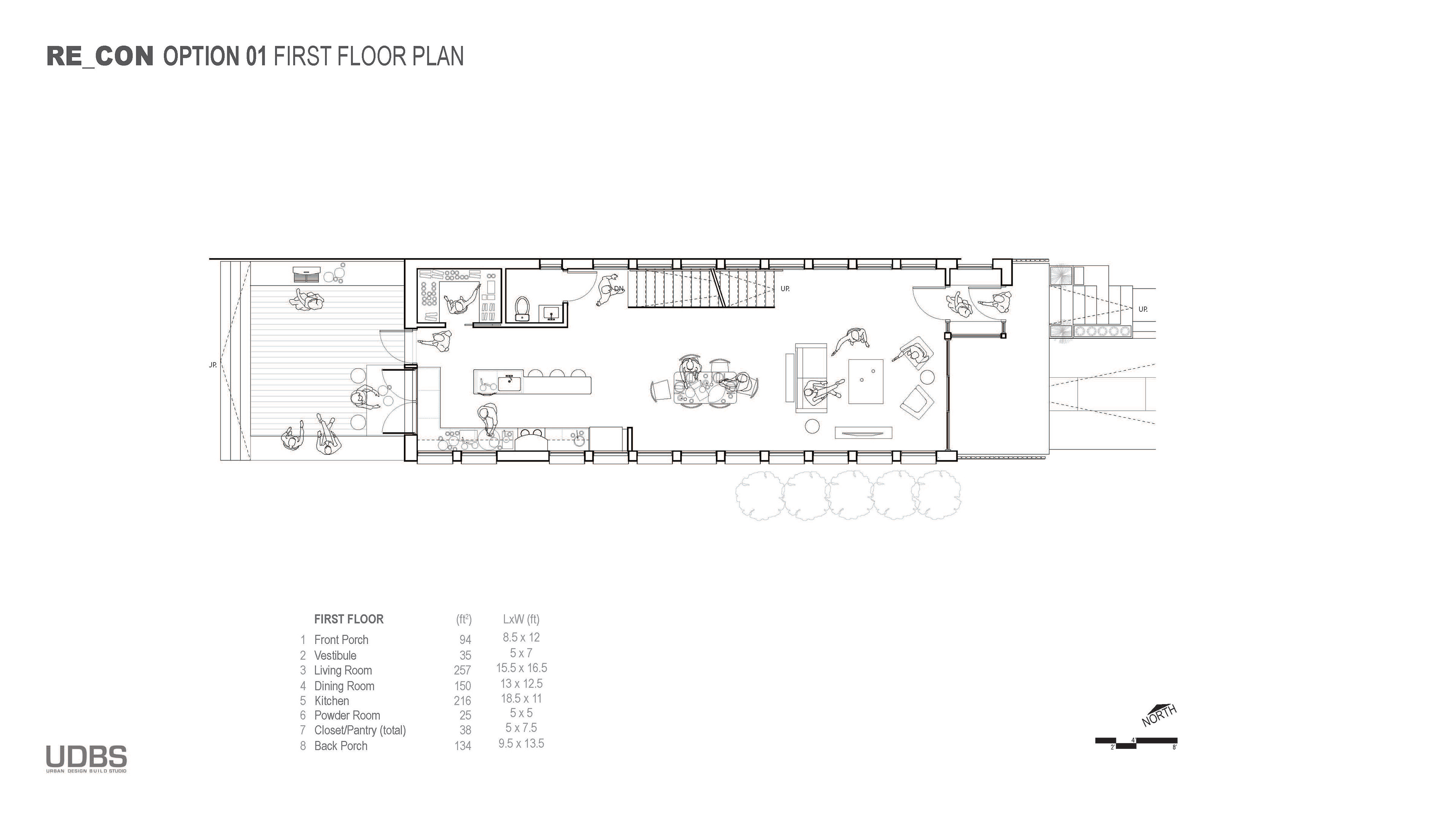 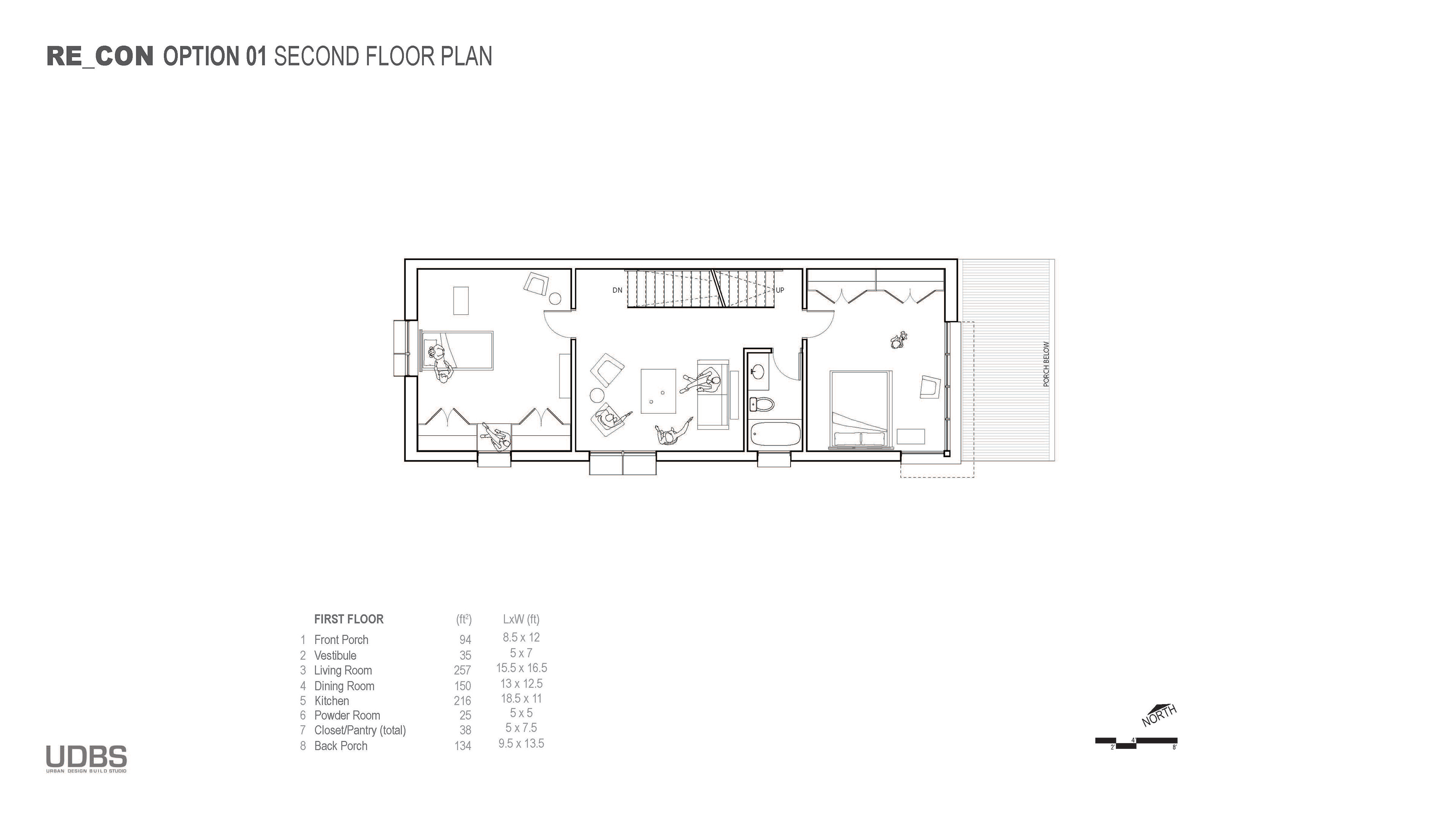 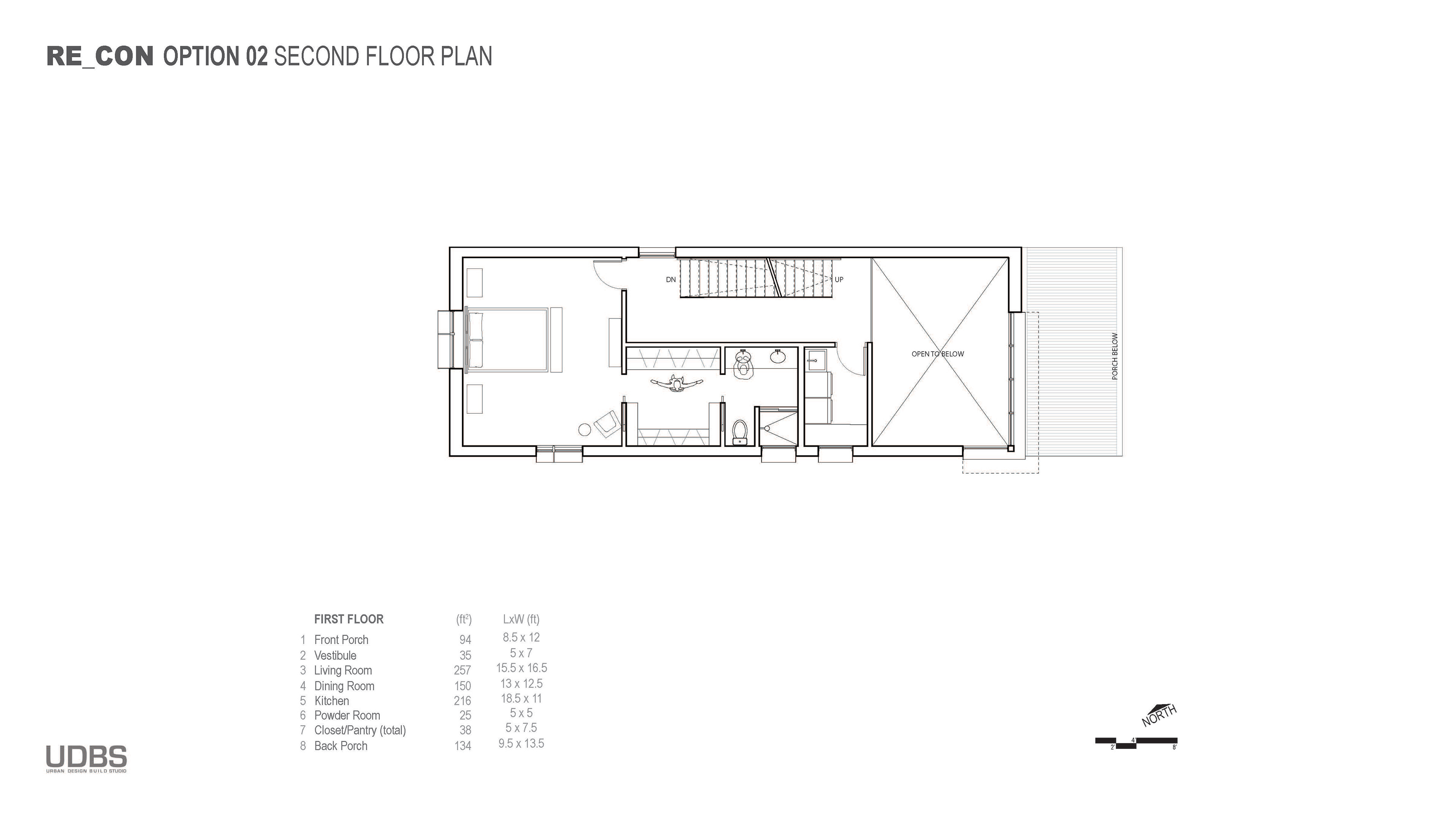 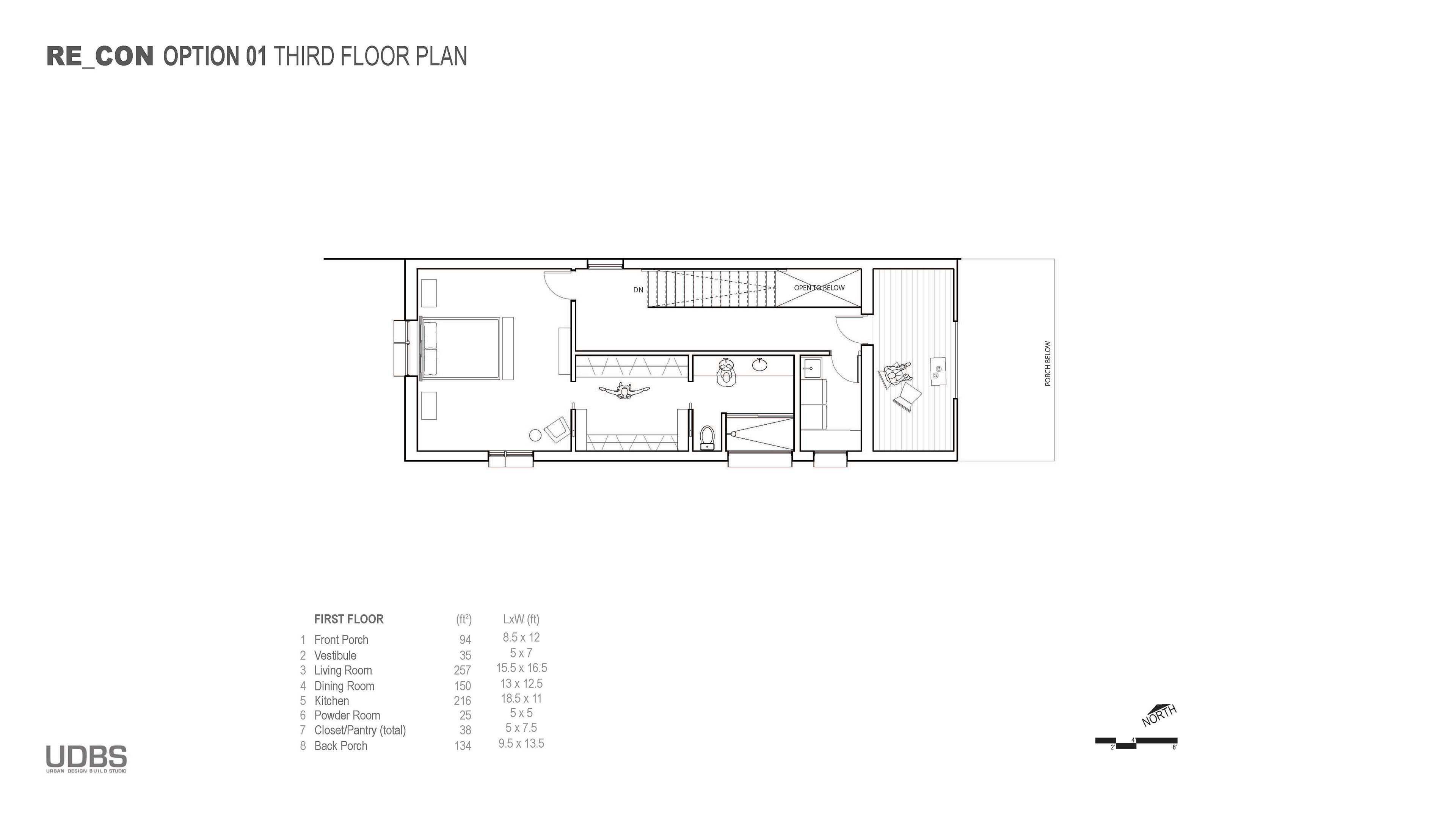 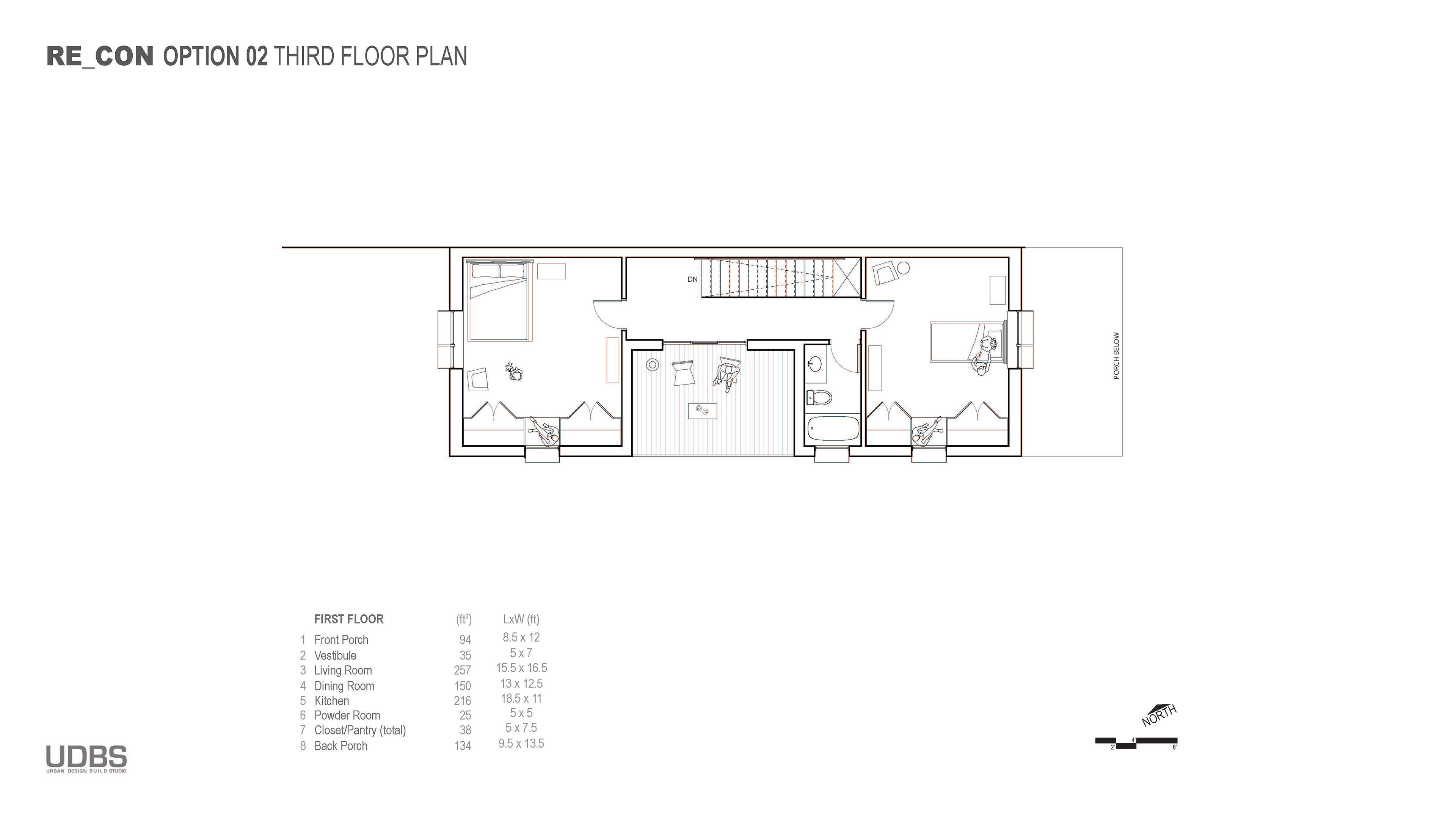 Interaction with the Community Planning Committee
The main source of feedback for the architectural layout and programming for the building was through the Community Planning Committee which involved key players from East Liberty Development Inc., Circles Pittsburgh, heavily invested/involved community members, etc. who came together to give a diverse range of feedback about the project. The plans were also informed by extensive sketching, rearranging, cutting, pasting, and trying everything we could think of, along with real estate market recommendations from the individual ultimately responsible for the sale of the two properties. In working through the plans, the market demand for parking led the project to implement a basement garage. And although we had considered several staircase configurations, we decided on a straight stair to allow for an open floor plan on the first floor, which heavily influenced the layout of the upper floors. The upper floors led us to different conclusions and, because many layouts were responding to specific forces, we ended up proposing several options. This also expands on the idea of a kit of parts system which is malleable to the buyer and to the market, allowing for variation across the housing prototypes. The second floor plan led us to propose two options: one allowing for a double height space above the living room on the first floor and the other recapturing the space to act as a bedroom. Although the double height space would add a significant spatial and qualitative strength to the design, an extra bedroom would definitely increase the sale value of the house. Moving to the third floor, we explored the roof balcony to address the market and also create a connection with the context and with the outside. While the side balcony would provide more privacy, there might be awkward interactions and so we also explored the notion of a front facing roof balcony. Ultimately, what informed the design decisions was a combination of collective intelligence and exploration advised by experts and professionals.
RE_CON Housing Prototype Goals
In order to more clearly portray the intent and manifestation of the architectural aspects of the design, we generated a series of renders that deconstructed views of the house to extract the many design decisions that were embedded. 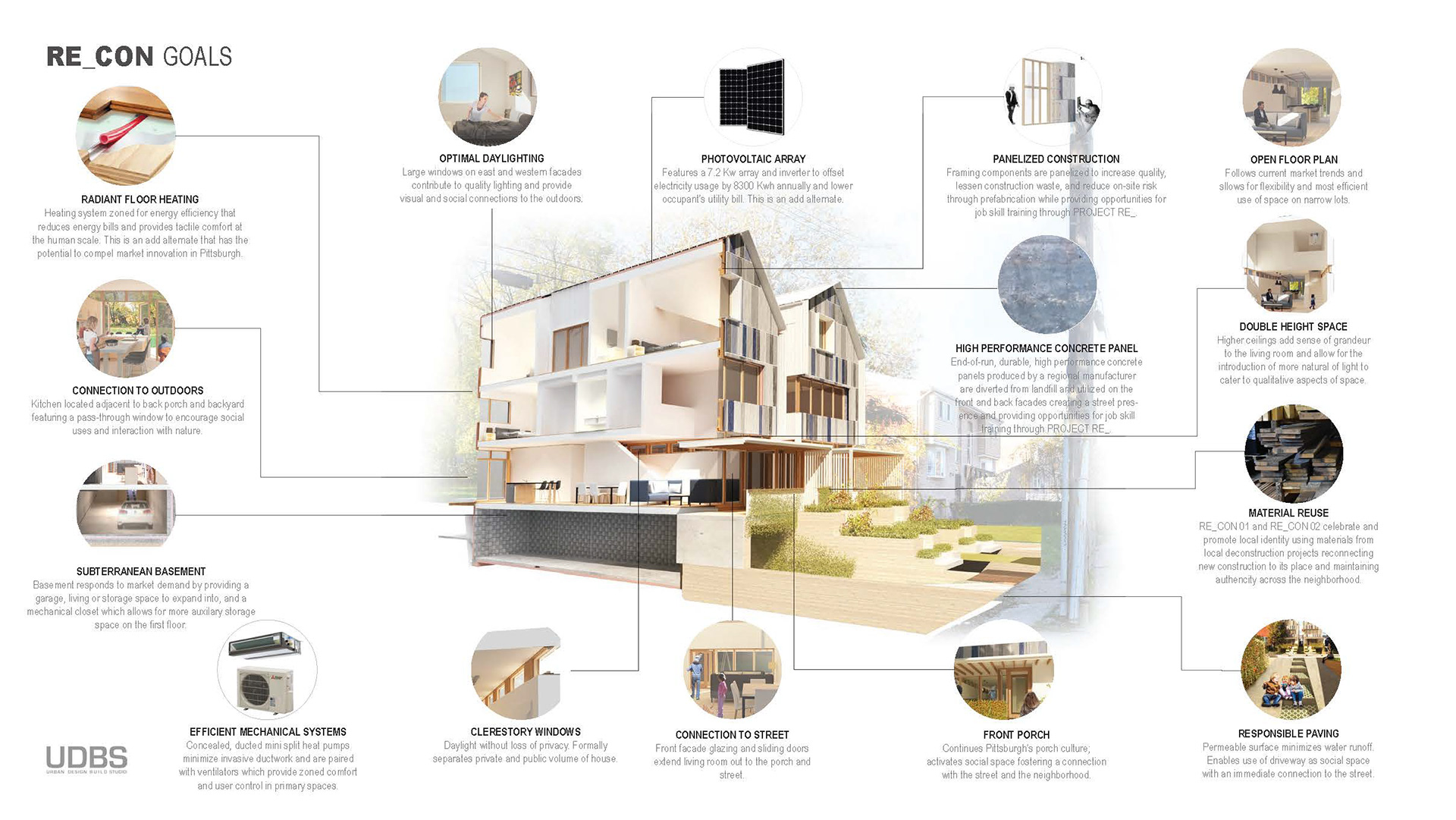 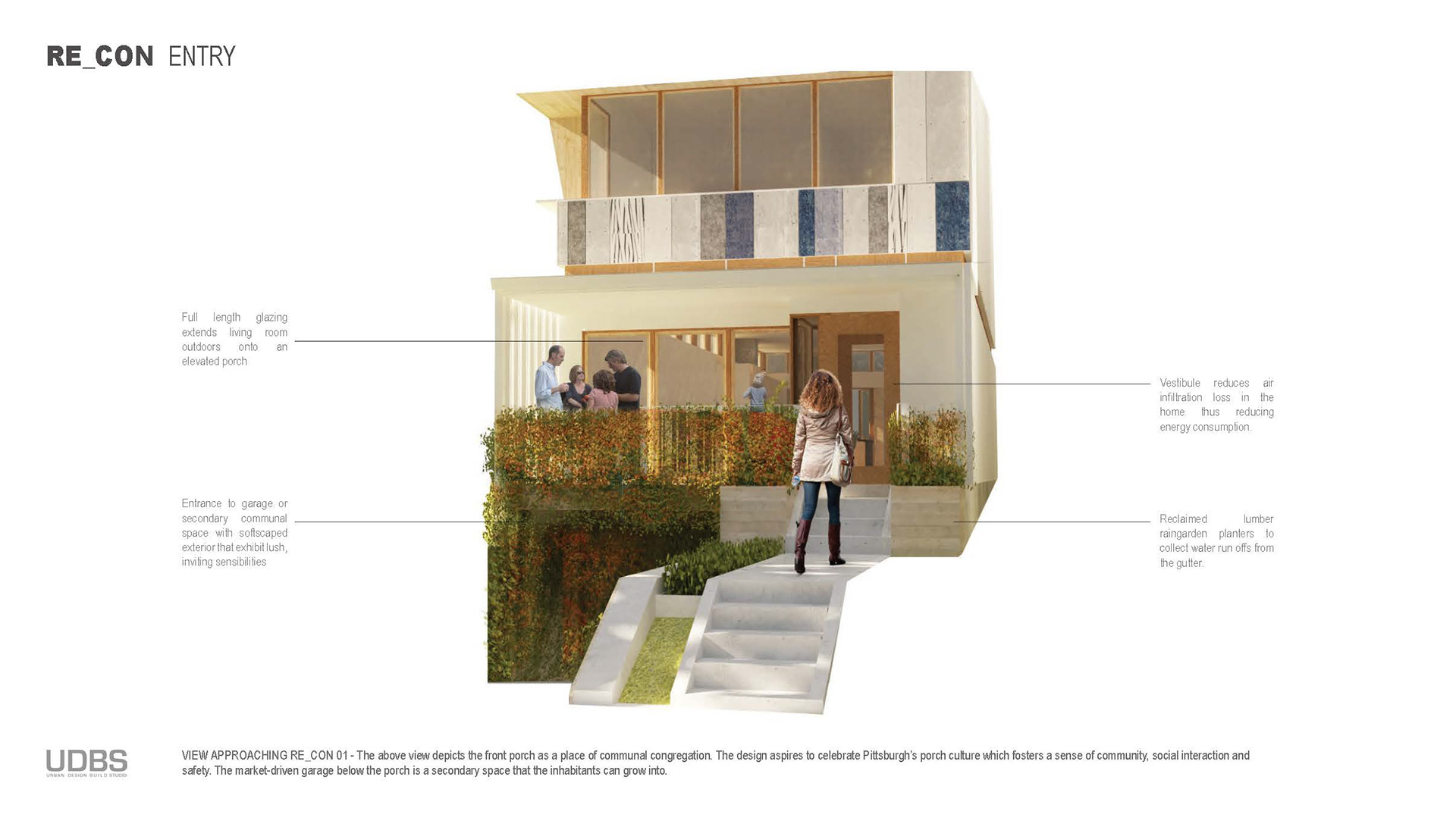 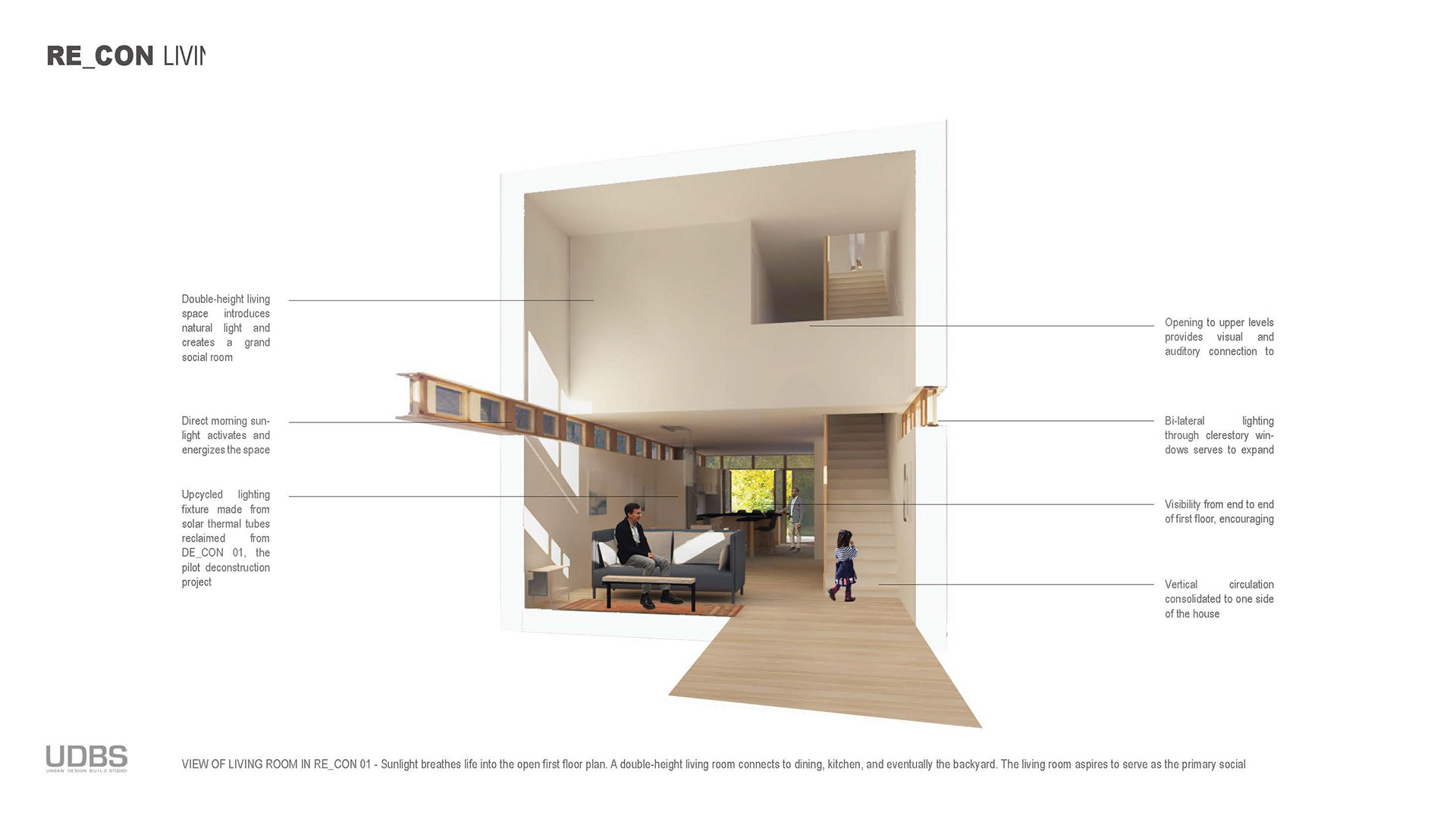 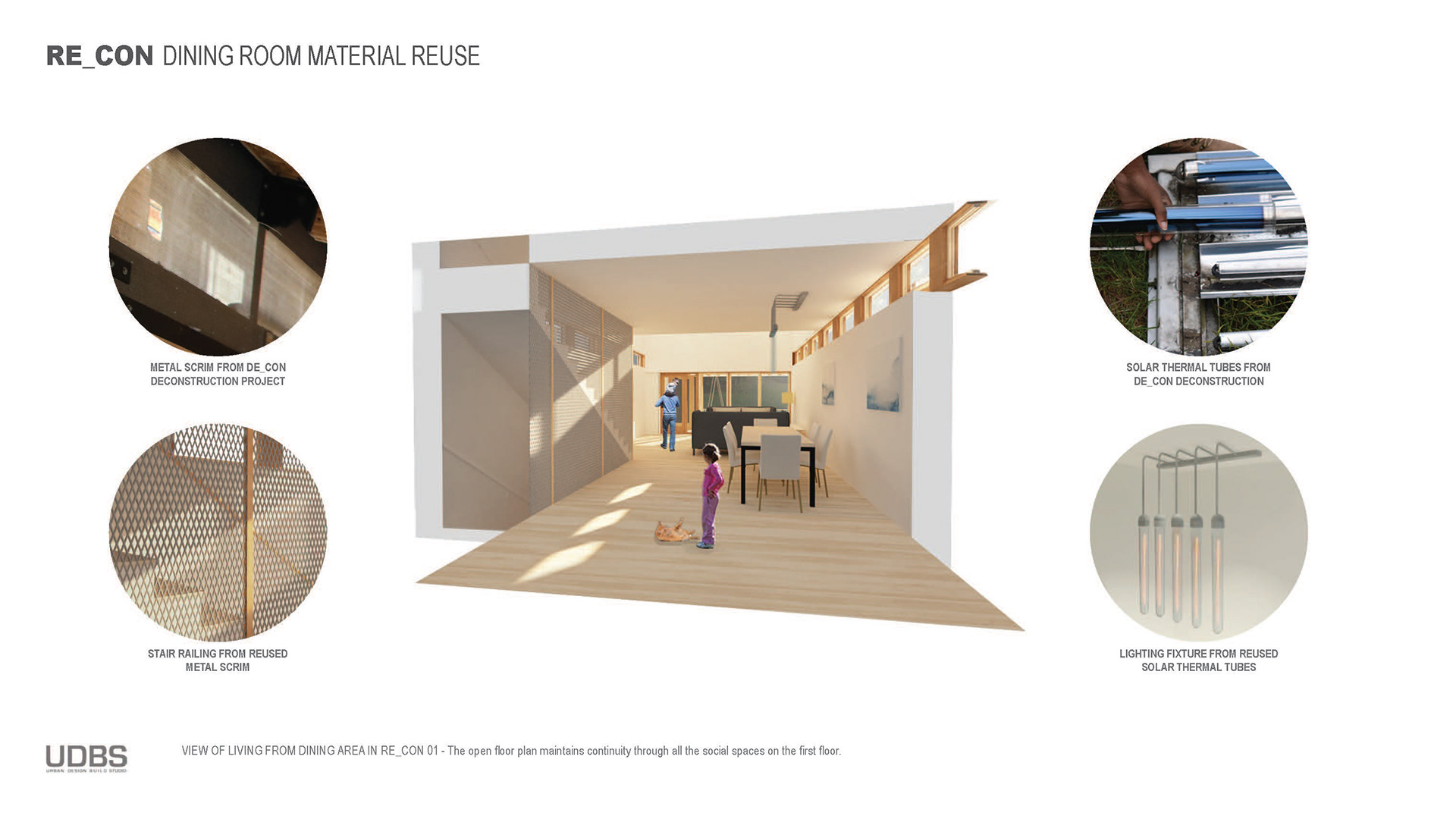 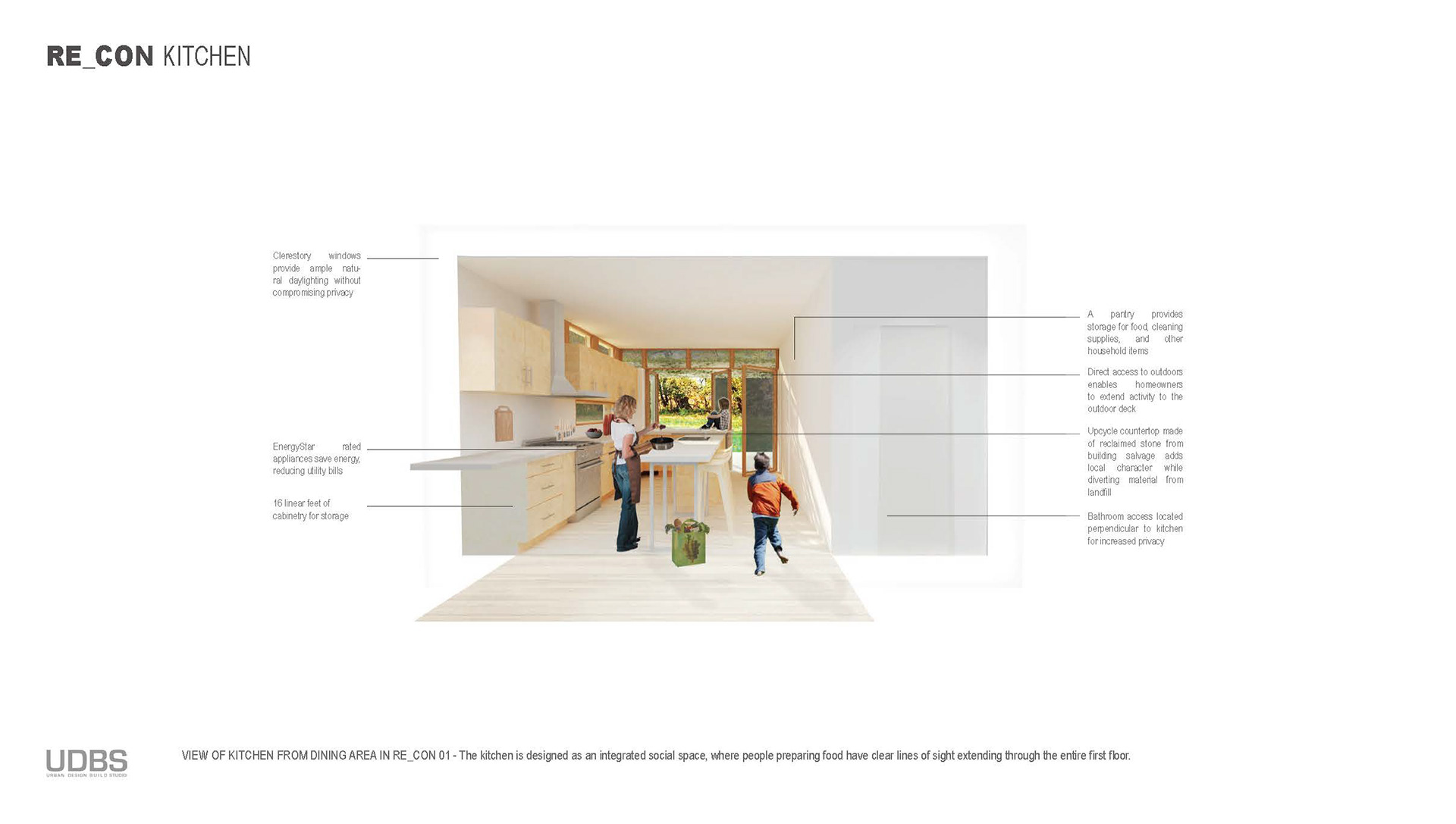 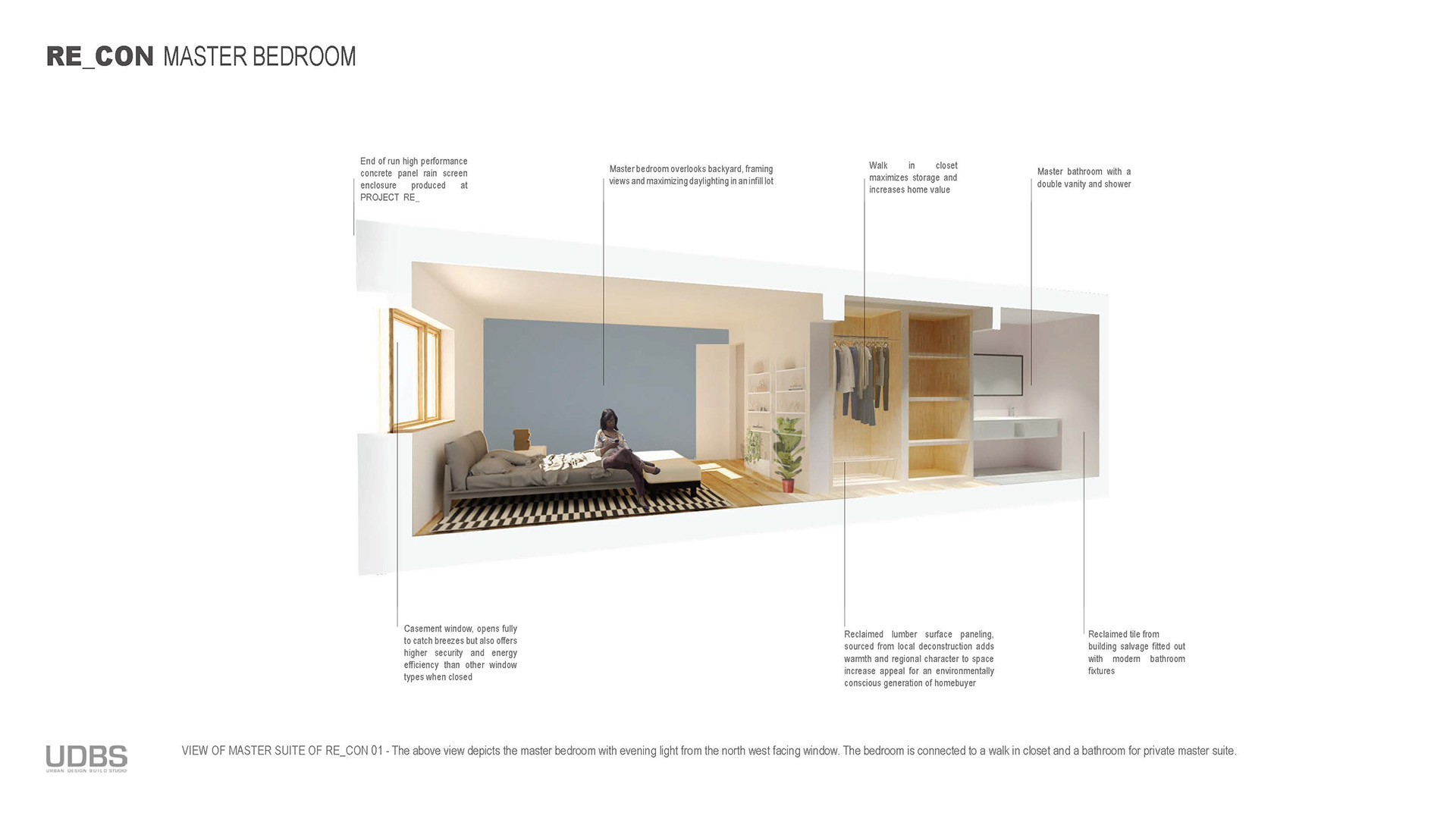 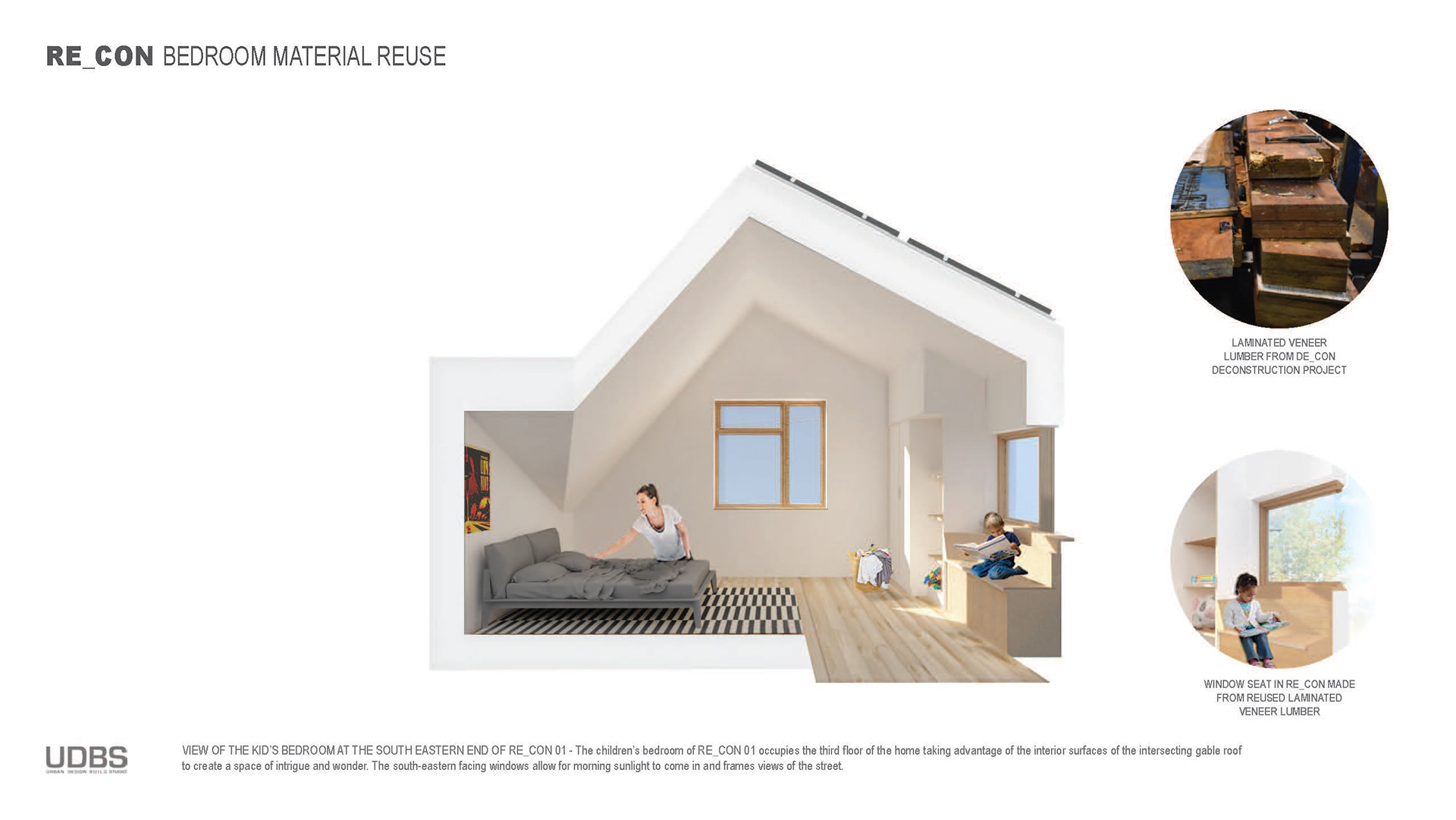 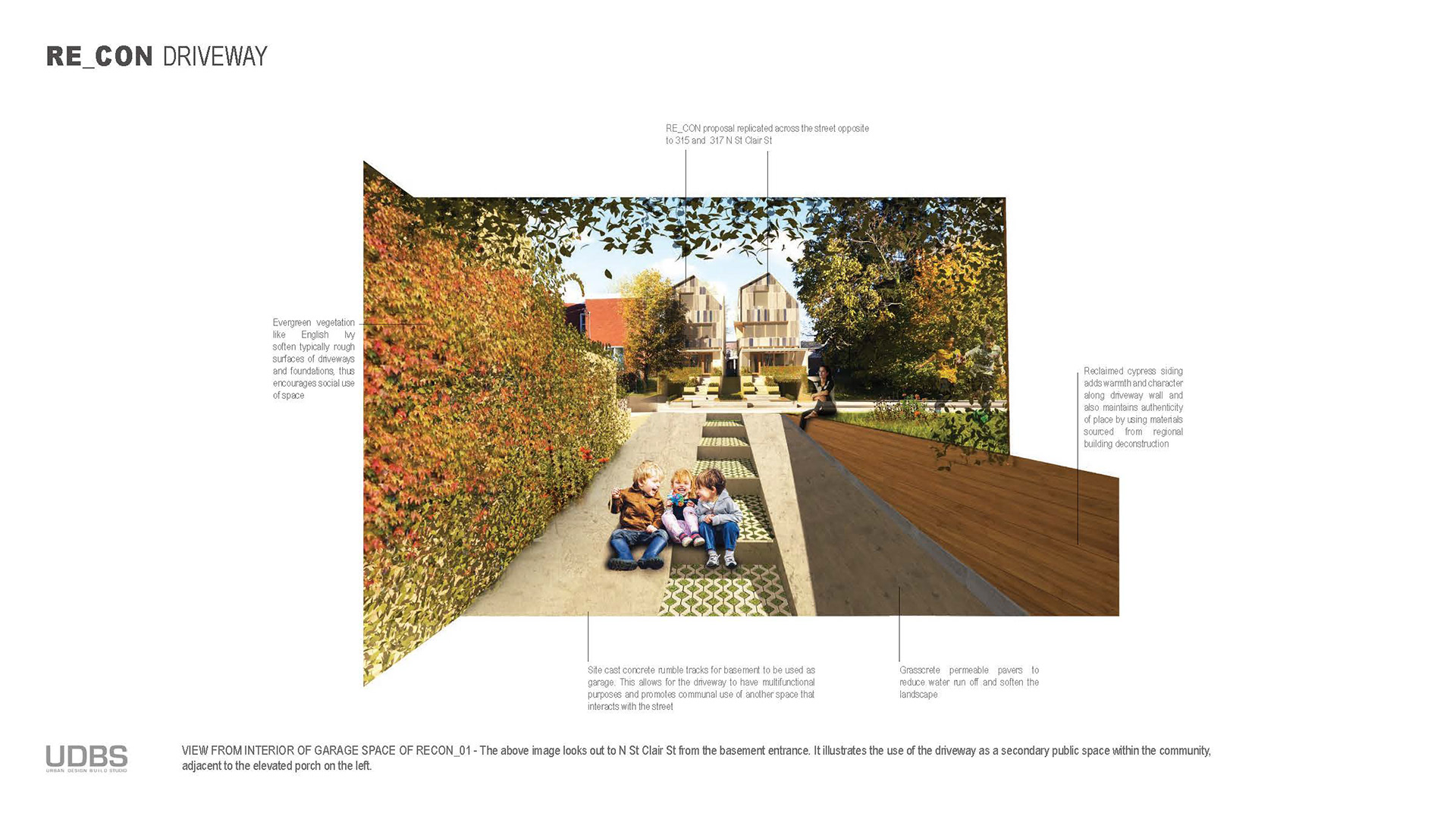 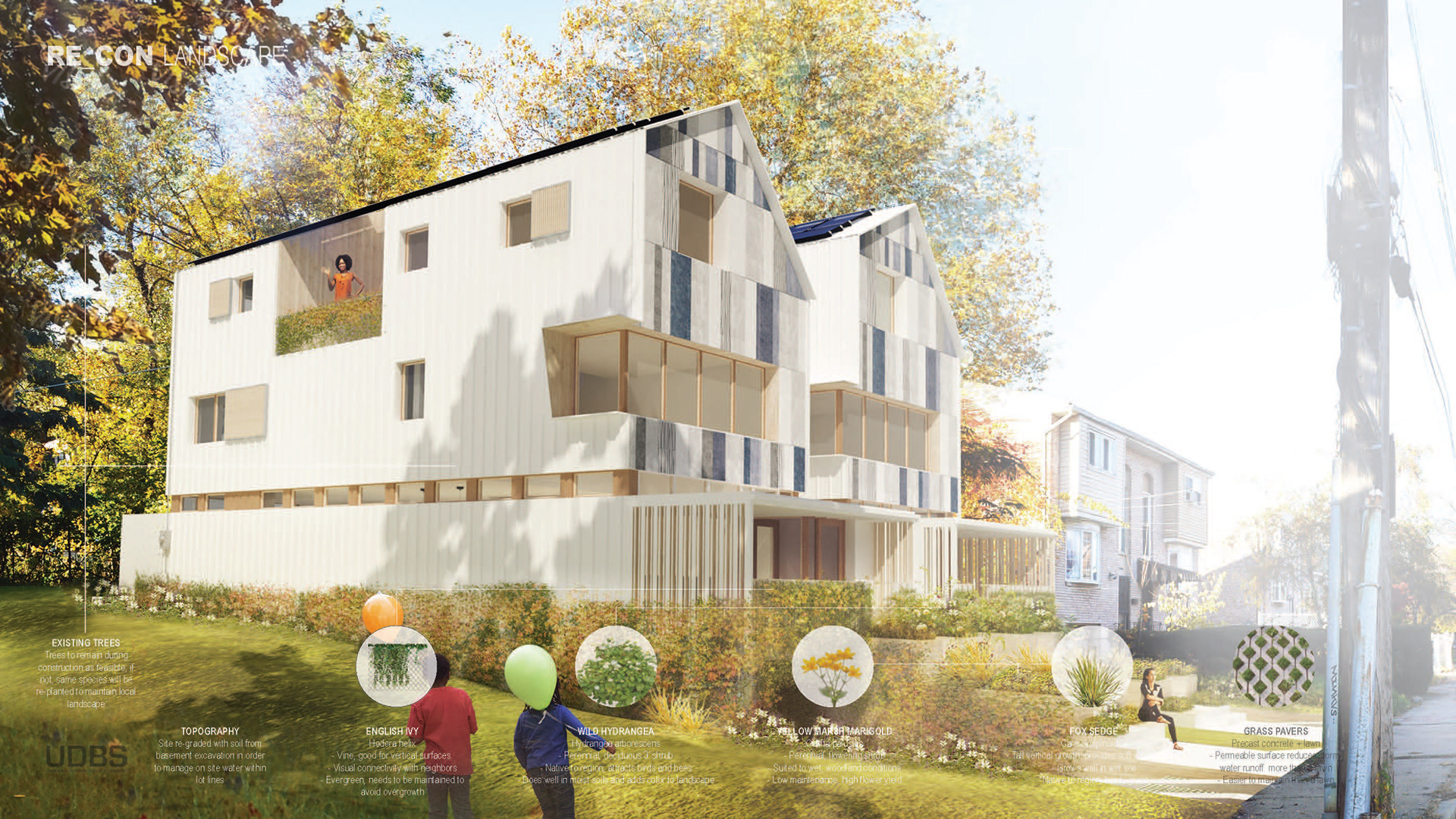 RE_CON Concept & Build Up Strategy
Urban Design Build Studio
I participated in this project as part of a larger collaborative cohort, for more information, follow this link to learn more about the team and the context of the studio!

Morph: Wood Span
↑Back to Top